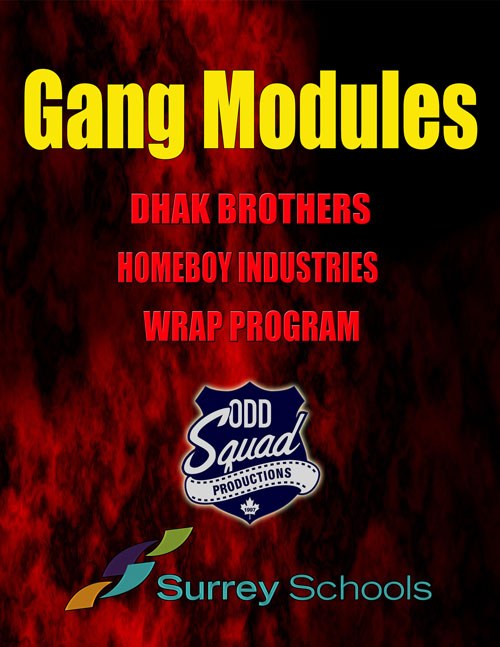 The Gang Educational Program has 3 modules. The first module is a detailed look at two young brothers and their spiral into the BC gang lifestyle, with the predictable tragic outcome. Module Two looks at the largest gang exit strategy in the world, “Homeboy Industries” in L.A. with OSP members interviewing the founder, Father Greg Boyle. The last module is a profile of an incredibly successful Lower Mainland anti-gang strategy called the Wrap Program.

Module 1: Brothers in Arms – Chronology of a Gangster (17min)

The first module, the chronology of a gangster is based on the lives of Gurmit and Sukh Dhak. They were able to move themselves up quite high in the gang lifestyle, moving a lot of drugs and making a lot of money. But with that, they were also learning the pitfalls involved in a gang lifestyle. Sadly, this reflects the reality of individuals who enter the gang lifestyle as both of these brothers are now deceased.

Gurmit Dhak only provided one interview about his involvement in the gang lifestyle. And that was provided to OddSquad Productions. In this interview he will tell us exactly what it is like to be a gangster.

Module 2 is about father Gregory Boyle and Homeboy Industries, the largest and the most successful gang exit strategy program in the world. They target their services to over 60,000 gang members. But what makes them the most successful of all is making sure that each and every young man and woman that walks through their door is connected to a healthy, mature, positive adult.

Module 3 is about the Surrey Wrap Program, an initiative that was based and developed in Surrey, BC. The Surrey Wrap is an exciting initiative that has been designed to educate and train people to recognize the signs that a young person may be on the pathway to engage in gang behaviour and/or recognize those kids that are already involved with a gang lifestyle. We recognize that there is a vast difference in the gang landscape in L.A. versus a gang landscape here in British Columbia. But we do have one common protective factor that plays a significant role in preventing gang involvement. And that is to be committed to building healthy, positive relationships. The key partners for the Surrey initiative had been the Surrey School District, Surrey RCMP, City of Surrey, and the Ministry of Children and Family Development, as well as multiple levels of support from a number of other community agencies. Surrey Wrap can be modelled in any community. Many of our agencies engaged and committed to the Surrey Wrap today are agencies that already exist in other communities. It’s important to just have people come into the table and making sure that we have the same strategy and the same understanding on what working together looks like. The research is clear. The power of overall connectedness is what makes a difference for our engaged, high-risk youth.